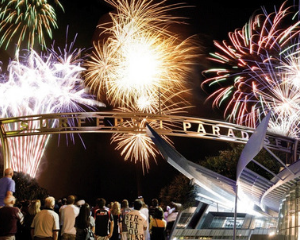 Head to the Gold Coast for the 2018-2019 New Year’s Eve and be in the middle of all the festivity and fireworks with our ocean front accommodation Gold Coast resort. Situated in Burleigh Heads, 2nd Avenue Beachside Apartments is your ideal place to stay on New Year’s Eve, where Burleigh Heads and surrounding locations will be alight with fireworks before and on the strike of midnight. Hotspots to enjoy the show include Burleigh Heads, Broadbeach, Surfers Paradise, Main Beach, and Southport, and you can be sure the atmosphere will be electric as the countdown begins on December 31!

Broadbeach will welcome the New Year with two fireworks displays at 8pm and at midnight, with live salsa music and dancing until the early hours. New Year’s Eve in Broadbeach is one of the biggies each year on the Gold Coast, and should definitely be one of your options this December 31.

North of Broadbeach, Surfers Paradise will be hosting the annual New Year’s Eve Carnival, which starts early on December 27 and continues until January 1. Expect carnival rides, street performers, market stalls, and one incredible atmosphere before one of the biggest fireworks displays on the Gold Coast which will paint the skies above Surfers Paradise Beach!

Other options on New Year’s Eve include Main Beach, which offers fireworks on the beachfront at 8pm and at midnight. There’s also Southport, which doesn’t disappoint with its display at 9pm over the Broadwater Parklands and its great views of the midnight fireworks on Main Beach and in Surfers Paradise. And just outside our Burleigh Heads apartment resort, don’t miss the fireworks above picturesque Burleigh Beach and Burleigh Head National Park.

For nonstop celebration and fireworks this New Year’s Eve book with 2nd Avenue Beachside Apartments today by going to https://2ndavenue.etourism.net.au